West End is honored to be named among other wonderful Loudoun eateries in the recent Top 20 Restaurants featured in the summer edition of Loudouner magazine. The list was compiled based on input from local food professionals, critics and cuisine lovers, according to Loudouner. 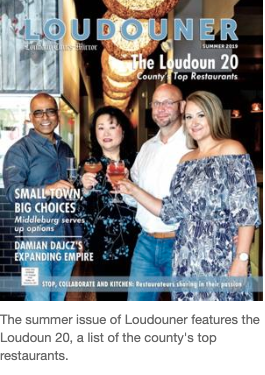 Here’s what they had to say: West End seems to have flown under the radar in its first few years of operating in Purcellville’s … west end. We can’t quite figure out why. Housed in a stately old residence and inn, this Southern-centric restaurant with the occasional curve ball is the perfect dinner stop after a day at western Loudoun’s wineries and breweries. Whether in the more formal – but not too formal – dinner level, or the downstairs tavern, West End is the kind of place where you just walk away smiling. Popular dinner items include jumbo lump crab cakes with duck fries and the local chicken pasta primavera.